7 gifts of Waldorf education for the young child

Everything That Parents Need to Know about Waldorf Education for Empathetic Parenting:

“Receive children in reverence; educate them in love; let them go forth in freedom.” – Rudolf Steiner.

What is Waldorf education?

Waldorf Education is a worldwide independent school movement developed in Europe nearly 100 years ago by the world-renowned Austrian philosopher, scientist, and social reformer, Rudolf Steiner (1861-1925). Today, Waldorf education is represented across the globe, with about 1,000 schools and nearly 2,000 early childhood programs in over 60 countries.

This is the basis out of which Waldorf teachers work to nurture and engage each child through a curriculum that integrates academics, arts, and practical skills.

Waldorf Education is based on meeting the developmental needs of each child, and so the role of the teacher or parent changes as the child goes through each 7-year cycle – early childhood, elementary school, and high school all have different approaches based on the needs of the children.

Here we’ll look at the Waldorf approach for babies and young children. 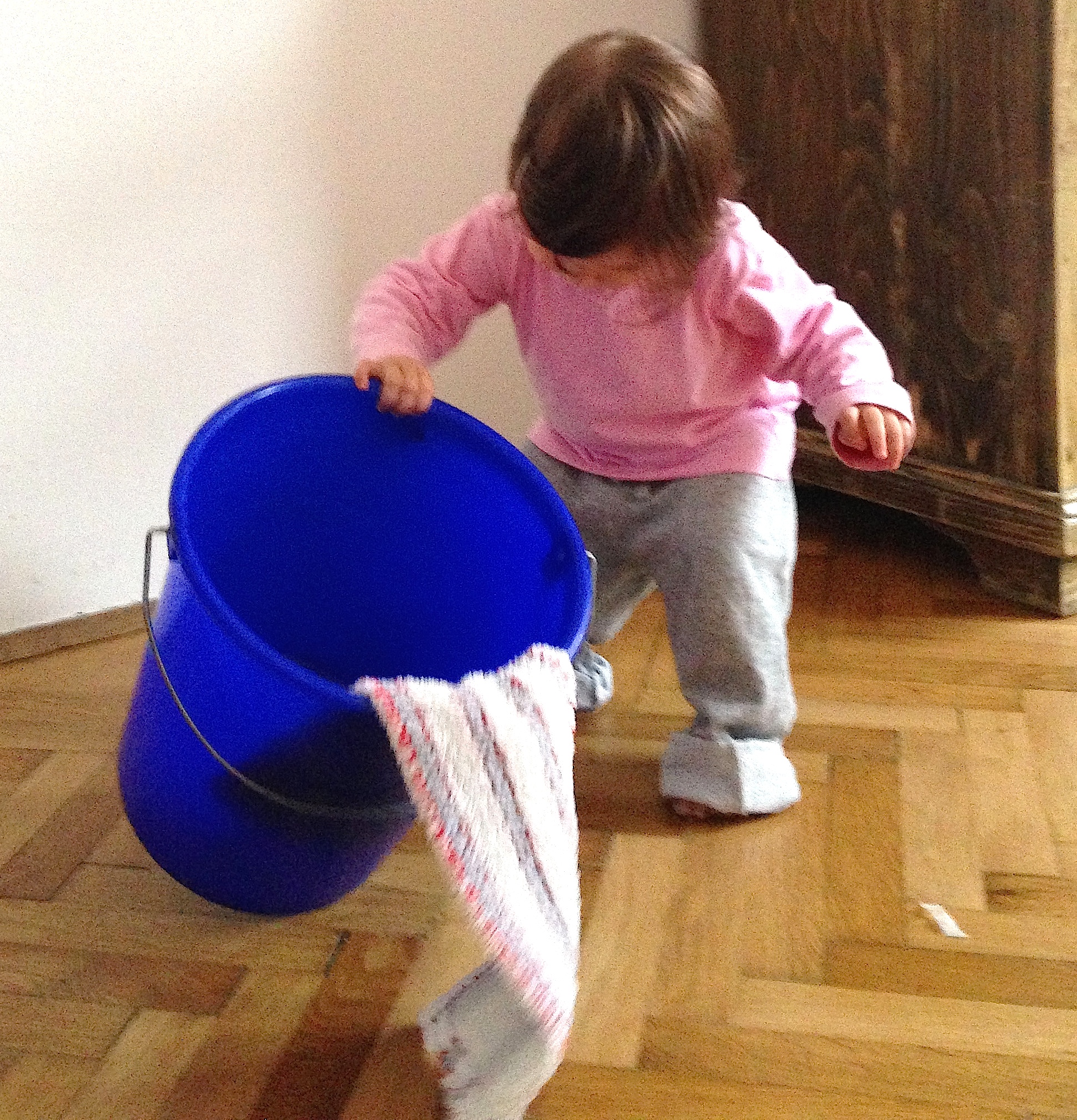 The growing child absorbs – from the very beginning – everything that happens around him–and especially what is done by his parents, caregiver, and later his teacher. Imitation does not occur only on the physical level. The child not only takes in our gestures and movement, but they also take in our:

Children take everything in on a very deep level and then process it – learn from it – by playing and self-exploration.

Whatever the child takes in with his senses comes out in his play, with his wonderful, amazing & wise interpretations of the world. We can truly learn to see the world anew through observing our children. That is why giving children enough space and time for free, playful activities and exploration is so essential. It is the best way for them to discover, experience, and understand themselves and the world around them.

Doing practical, meaningful things to imitate
Neuroscience teaches us that it’s important for young children to experience adults doing real work that they can imitate or help with. 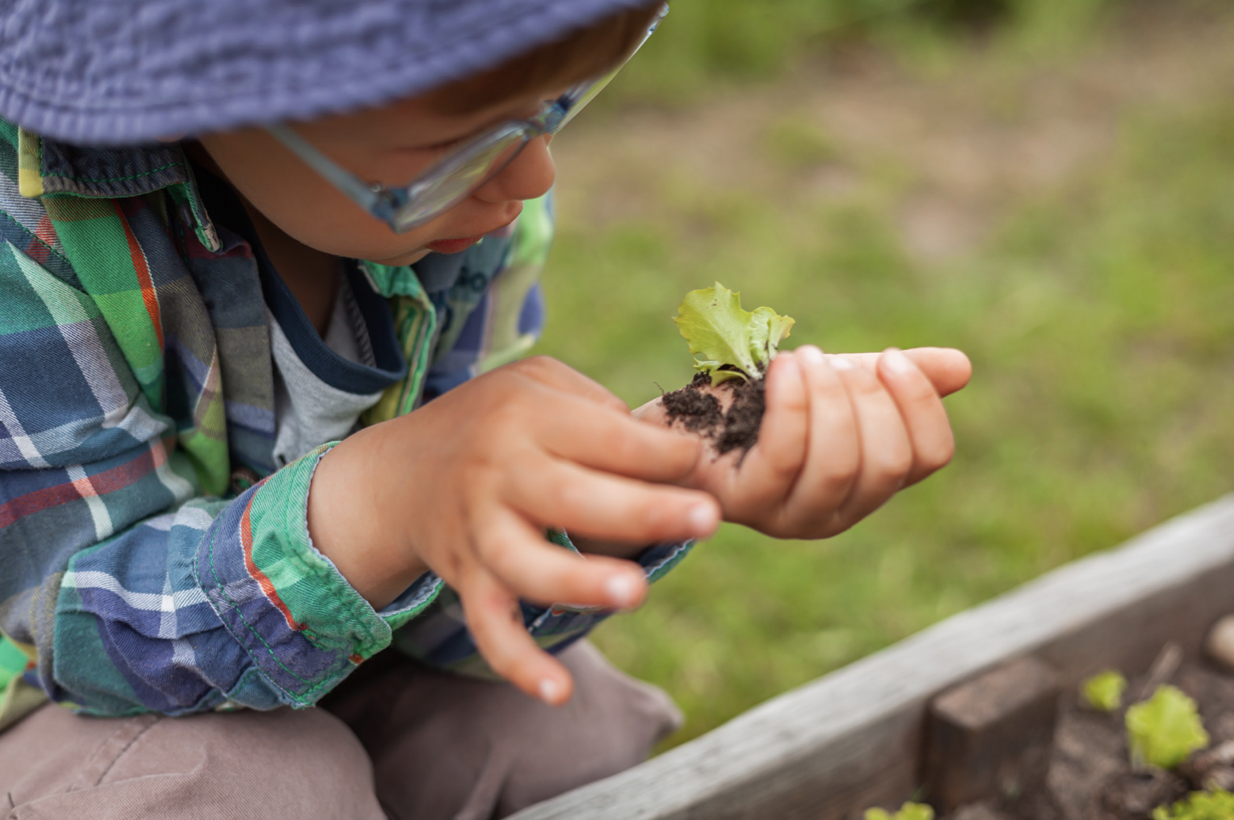 In a world where we do more and more things electronically on our computer,smartphone, etc., it is even more important to make sure that children see us doing practical daily activities/work that they can imitate – such as household or gardening chores.

Children want to be as capable as we adults are. They want to participate whenever possible and are eager to grow and develop into capable, active & needed adults. We simply need to exemplify practical, meaningful activities that they can imitate.

The Importance of Finding Out for Themselves 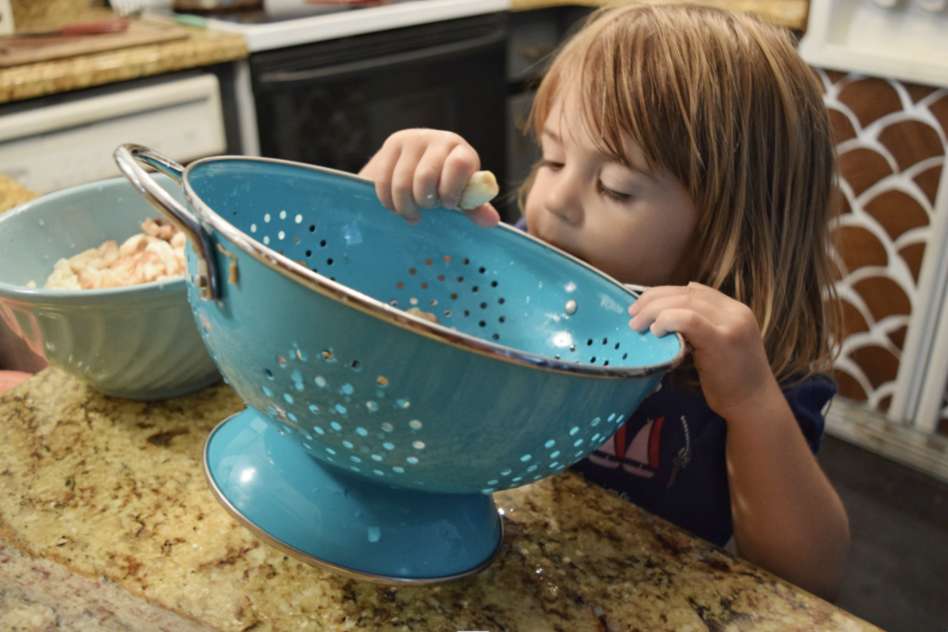 Children at this age can not process scientific or intellectual explanations, because their brains are not developed to digest them yet.

So if we talk to children on an intellectual level too early, when their brain is not ready yet, the world appears complicated and difficult to them. Intellectual explanations such as, “The sky is blue because as sunlight of all colors passes through air, the blue part causes charged particles to oscillate faster than does the red part…” may be scientifically accurate – even though if you are not a scientist you probably would not have such a complex explanation ready– but we so often give our children intellectual answers that are way too complicated and don’t really make sense to them. The simple answer of, “I wonder,” is perfectly acceptable, as is a simple imaginative response like, “So the golden sun can shine through.”

So we do not need to explain to them how the world around them works, how to use their stuffies, how to rattle their rattles, how to put sand in the bucket … or teach them skills like standing up, walking, speaking, etc.

How often do we take a baby’s hands when he tries to stand up by himself, trying to help him – with the best of intentions – to walk?

Children simply need plenty of opportunities, time, and a safe environment to discover for themselves how everything works. 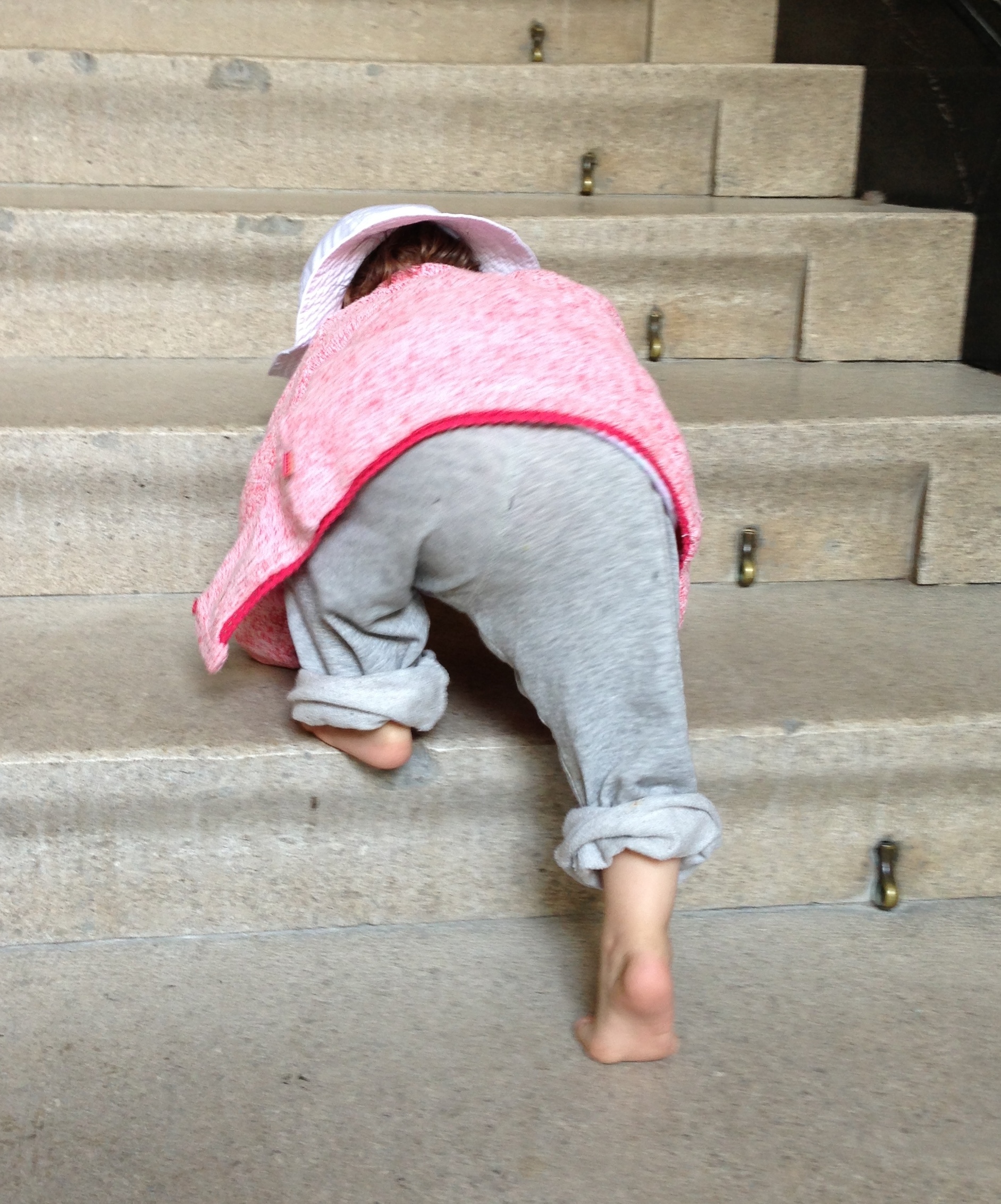 Only through finding out for themselves does the growing child develop:

Waldorf Education Essential # 3 – The Only Education is Self-education

A Challenge and Opportunity for us as Parents

The fact that children learn through imitation leads us to another essential of Waldorf early childhood education. Steiner tells us that the only education is self-education. So what this means for the adult caregiver is that, knowing that the child takes in deeply everything we do, we strive to be worthy of imitation.

Not only will these skills make our own lives better, but we also exemplify them for our children to imitate and value, as well.

So being a parent is our chance and our challenge to constantly learn more about ourselves, to keep developing – which is a lifelong process for sure!

Part of providing an environment in which the child can thrive and grow is providing them with lots of love and warmth. Warmth refers to both physical warmth and emotional warmth.

Steiner felt that keeping the child physically warm would help them to develop soul warmth later on. But it also means that we can be like the sun, shining on our child with love and without judgment. Imagine how it feels to be loved and accepted for who you are. It helps our children – and all of us – to grow and blossom into our true, best selves. 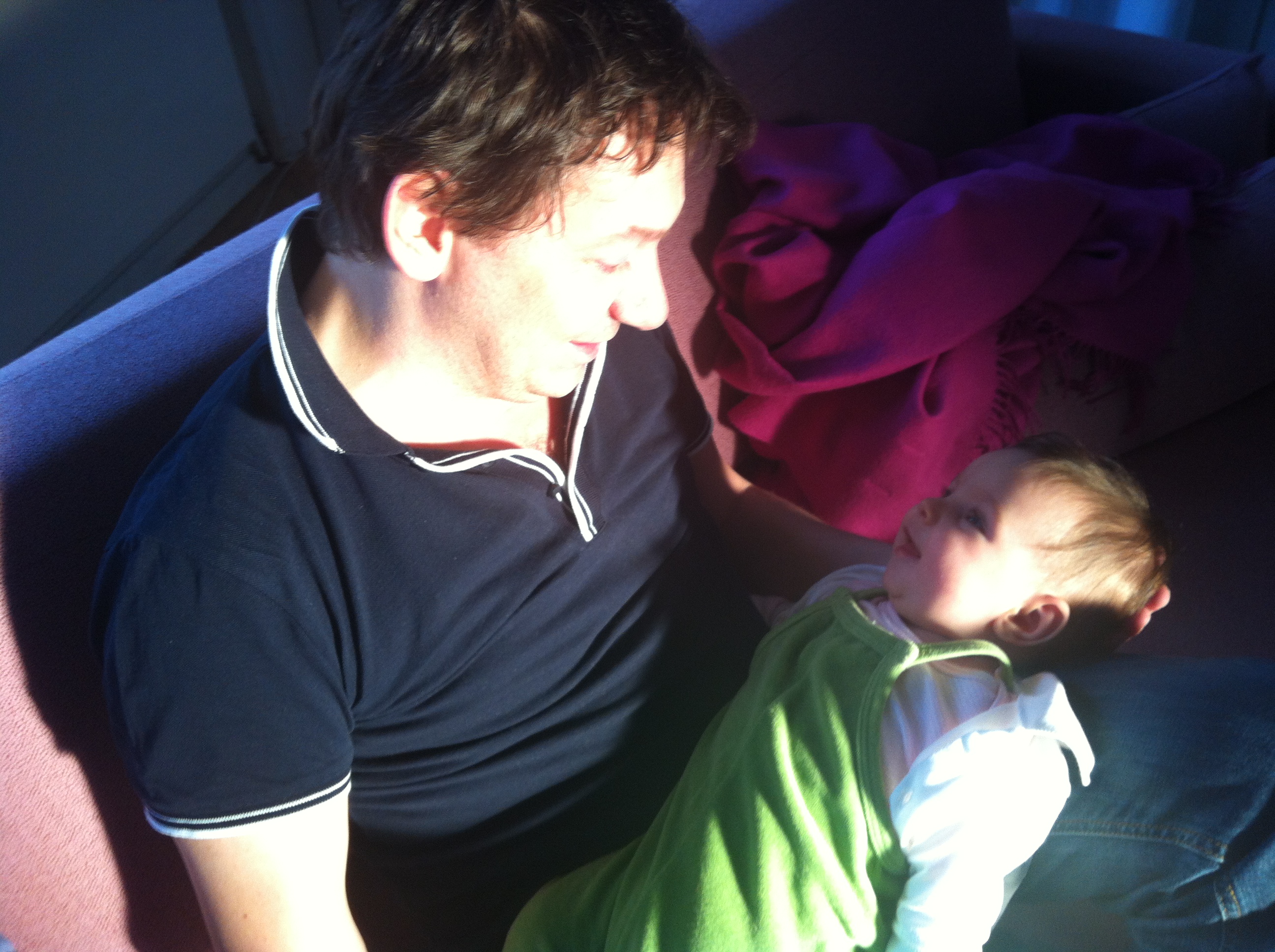 Essential # 5 Protecting and Nourishing the Senses

As mentioned above, the child takes in everything that occurs around him. They don’t have the ability to filter out sense impressions that are too strong. If you live in a city, everywhere you go, there’s noise and screens and all sorts of sensory input. Plus there’s also what Kim John Payne, author of Simplicity Parenting, calls the four pillars of too much: too much stuff, too much information, too much speed, and too many choices. To the extent we can, we should try to protect our little ones from too much sensory input. They usually give us clear signs when they are overwhelmed: They start to cry, get wild, or sleepy. Every child has their own reaction to overstimulation–and no one knows better than you what that looks like for your child.

We can nourish the senses of the young child by giving them:

Although you can buy many wonderful “Waldorf” toys, you don’t have to spend a lot of money to provide a nourishing environment. YOUR unconditional love and warmth, time in nature, and simple natural toys will best nourish your child’s senses!

Another important Waldorf idea is about creating a healthy rhythm.
A newborn baby doesn’t know day from night. Gently, we can guide him to sleep at night and be awake during the day (with several naps).

In Waldorf early childhood classrooms, the caregiver creates a healthy rhythm for the children. They think of them as inbreaths and outbreaths – a breathing rhythm:

The inbreath is a time when caregiver and children come together–like circle time or snack time. These in-breaths also include daily care routines at home or later on at school.

Outbreaths are free self-discovery, playful activities and time outside in nature – a time when the child can move, play and explore freely without direction from an adult (except as needed to keep the children safe, of course.)

The younger the child, the more they need longer outbreaths–time to move, play, and explore by themselves freely–and shorter in-breaths.

Essential # 7 The World is Good

The world of the young child mostly consists of home, family, and friends. It may seem small from the perspective of an adult BUT it’s big for your little one!

One thing they need to know is that the world around them is a good place. We want them to be fullfilled & happy to be here.

Remember that the young child learns through imitation, so in order for the child to learn this, we must believe it ourselves. This can be very difficult–the world is complicated and we are living in difficult times. But we can focus on the things that we are grateful for and that we can truly perceive as good – which can be little things such as:

And of course, we can look into the amazing face of our little one, see the love and trust in their eyes. They can help us to remember that the world is good!

Your perception of the world deeply nourishes your child’s soul and spirit.

Don’t feel pressured and don’t try to pretend that you are happy when you are troubled — your child knows your true feelings whether you tell them or not.

What we want to encourage is for you to be aware of your view of the world and to focus on the positive whenever possible.

Essential #5 Protect and nourish the senses

Stay up to date with the latest & greatest in mindful parenting.